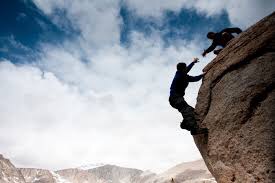 I have always had a passion for being outdoors – as a young person doing the DofE and scouting and later in the military. This has taken many forms – climbing, mountaineering and paddling, basically anything outdoory. For me it has always been about the freedom and fun, the risk and the challenge.

In the military I became an outdoor instructor in paddling, climbing and mountaineering – mainly so I could do stuff but increasingly so I could share my love of being outdoors. This led to expeditions  all over the world. The underlying ethos was to instruct techniques  – survival, climbing, walking paddling strokes. And I became quite good at it. 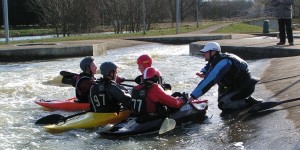 After having a family and a bit of a break  I got back into paddling, largely due to my kids doing scouting and being asked to help. I then embarked on ‘retraining’ becoming a paddle and climbing coach. I was really surprised to find that the landscape had changed greatly. We were no longer instructors but coaches. No longer focusing on perfecting strokes but more about skills, fun and enjoyment . This has of course generated a new industry of qualifications and requirements, mostly sensible I think.

As well as paddling I have also updated my climbing and hillwalking qualifications and think that the move towards a coaching culture is welcome. For example climbing has moved from telling how to make a move to a more holistic view and approach of coaching movement, balance, forces. Even mountaineering is moving in this direction with the focus on the client experience – flora and fauna (never my strength).

I think you can teach an old instructor new tricks! I have recently undertaken the Moderate Water Endorsement programme for paddling with http://gene17kayaking.com/. I was so impressed by my coach, really talented, experience and supportive, a real role model. Again exemplifying a changing way of working with young people.

Another area I have been developing working outdoors, having gained my Mountain Leader qualification recently I undertook the ‘train the trainer’ course at Plas y Brenin. Led by a former geography teacher this was very much about supportive learning, not being judgmental and discovery learning, not dissimilar to my style of teaching in the classroom.

Reflecting on the developments in the outdoor industry there has I think been a massive change, largely for the better, towards a coaching model that is supportive and inclusive that should see a greater uptake in people of all ages taking on adventures outdoors.

For me coaching is like teaching, making a difference to people,

“Each person holds so much power within themselves that needs to be let out. Sometimes they just need a little nudge, a little direction, a little support, a little coaching, and the greatest things can happen”

Unlike instructing, coaching is a dynamic two way process, before the session not just about the skills but the needs of the coachees, during the session a intricate dialogue (supporting, motivating, encouraging) and afterwards a reflection on the experience, what has been learnt and what I have learnt too. Always thinking of new ways of doing similar sessions in a different way so that it will engage, motivate and inspire!

It reminds me of my first years of teaching, I had a colleague who had been a classroom teacher for over 30 years, he was far from past it. He kept his enthusiasm and motivation by focussing on the people and the learning and the fun of the whole experience, living in the moment day by day. I swear he was the biggest child in the class with bounds of enthusiasm and curiosity.

But I don’t think coaching is quite teaching like instructing is neither coaching or teaching. A discussion for another time I think! Thoughts appreciated!